All scripture is inspired by God and is useful for teaching, for reproof, for correction, and for training in righteousness, (2 Tim 3:16)

Most of this day's walk is on the SW Coast path so we have the benefit of its waymarks. It is clearly divided into the mornings up and down along the Undercliff to Seaton and the roller coaster afternoon. There is no road access to the Undercliff path so take care not to turn an ankle on the multiple ups and downs, muddy patches, stairs and tree roots. It is mostly through mixed forest until the last mile before lunch when we finally ascend the escarpment into the open air. Seaton has a good choice of cafes and a decent pub for lunch, The Malt House. There is a brisk up and down over a headland to Beer (the tide is unlikely to be low enough for a beach walk) where we have a church stop. A zigzag through the alleys leads past the Pecorama Pleasure Gardens and up the hill again. This is the direct route to Branscombe where we pass The Masons Arms and a couple of NT places. There are loos behind the village hall and by the NT bakery teashop. Branscombe church is a jigsaw of church architecture from the Saxons onward so a great old survivor. The rest of the afternoon is a lovely scenic walk made gruelling by three ups and downs between 250 and 500ft at a time. As is the case for the morning there is no further road access unless one diverts well inland to narrow country lanes. All in all a strenuous days walk. If a pilgrim wished to shorten the day the afternoon is the most varied walking but the morning less strenuous.

Eek, the backmarkers are on my tail John Chenery

There followed 7 miles of wooded landslip with countless tree roots and flights of steps to negotiate. There were signs warning how long the walk can take and that there are no other paths either to the right or the left to provide an escape ... new pilgrim Cath fell over and here she is in second place in this group with an arm in a sling which Larry (first in the group) had improvised. We took turns in carrying Cath's rucksack for her. John Chenery

Seen enough of these:)

A rare view of the sea through the landslip forest. nor2747

Pilgrims fraternising with golfers on the approach to Budleigh Salterton nor2747

The downhill route into Seaton at last. Much relief! Maurice Hickman

The Malt House, Seaton, and the square outside. Meanwhile Cath was taken to A&E and the X-rays were to reveal a triple fracture so it was sadly the end of her pilgrimage. Get well soon, Cath! John Chenery

Leaving Seaton via the beach. Now we are in Devon, the rocks are red. John Chenery

That says it all Jim Brodie

Outside St Winifred's church Branscombe. Is she still alive? claregamble

A previously untweeted photo from Pilgrimage day 10: the backmarkers coming down the slope don't look that far behind but little do they realise they are going to have to go right down to sea level on the beach and back up again to get to where I am! John Chenery 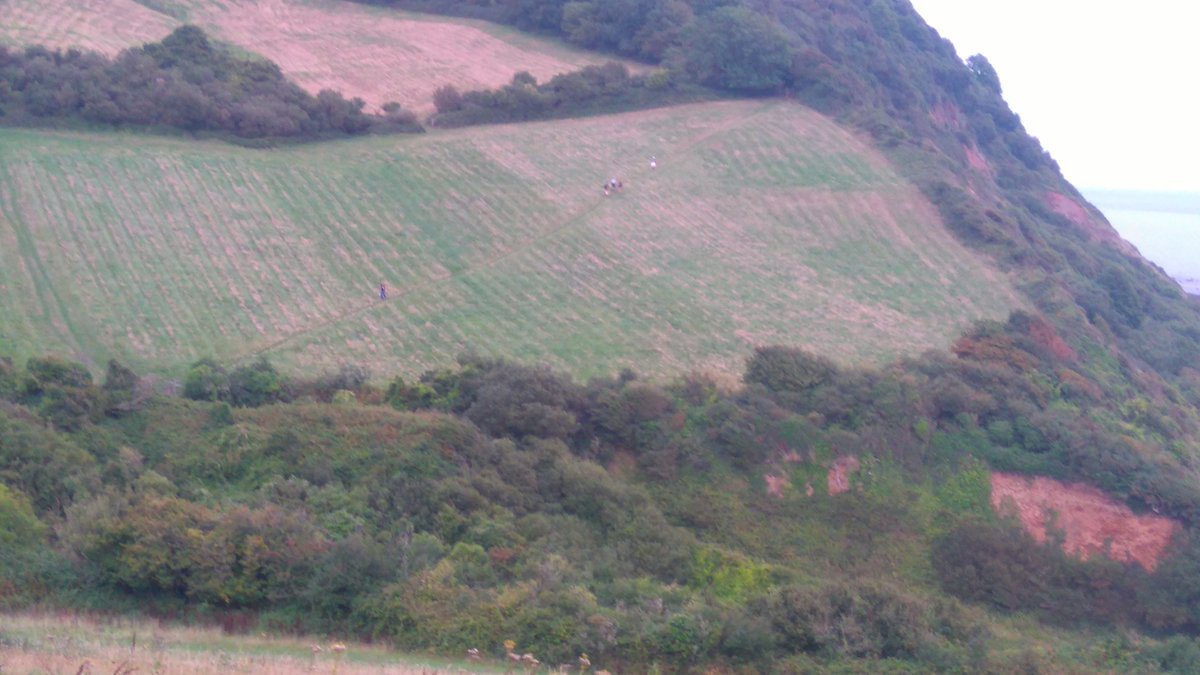 Well Sidmouth is at least in sight John Chenery

The frontmarkers are preparing for dusk with reverse arrows John Chenery

just about making it in in daylight John Chenery